I was cycling through a light industrial area in Auckland City when I came across a rubbish bin awaiting pickup on the side of the road. It caught my eye as it was practically overflowing with discarded LED Matrix modules - big ones, about a foot in each dimension! I couldn’t believe it - firstly, discarding e-waste in a manner such as this is actually illegal in New Zealand. Secondly, the LED modules - for the most part - actually looked to be in pretty good condition! I grabbed as many as I could carry on the bike and carried on home, keen to see if I could get them going!

Note: All work used in this blog post is published on my Github.

Second note: After I posted this to Reddit, user /u/dakesew identified the protocol as a subset of Hub75, discussed further at the end of this post.

Here are pictures of the front and back of one of the LED modules. 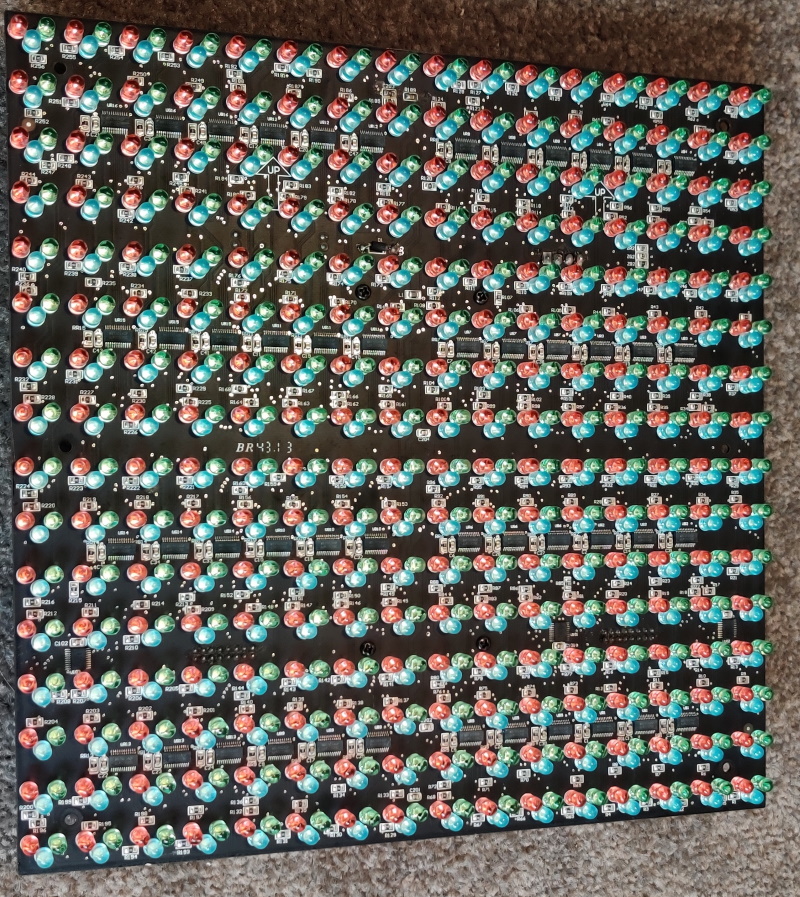 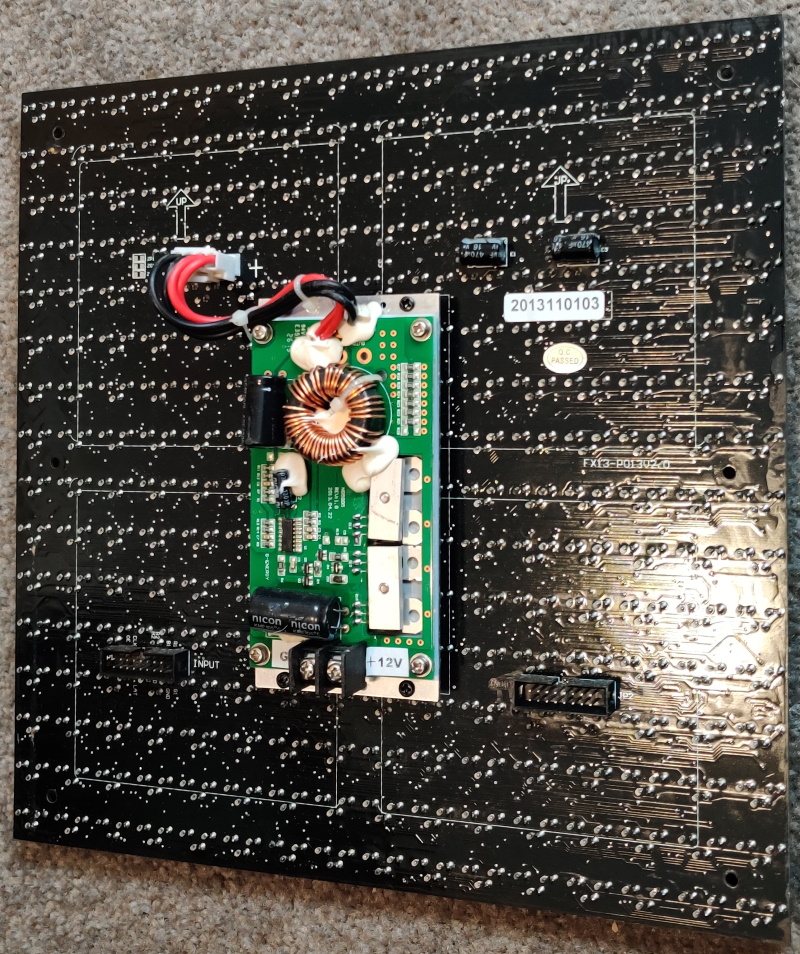 Straight away we can see several interesting pieces of information.

The input port is interesting: 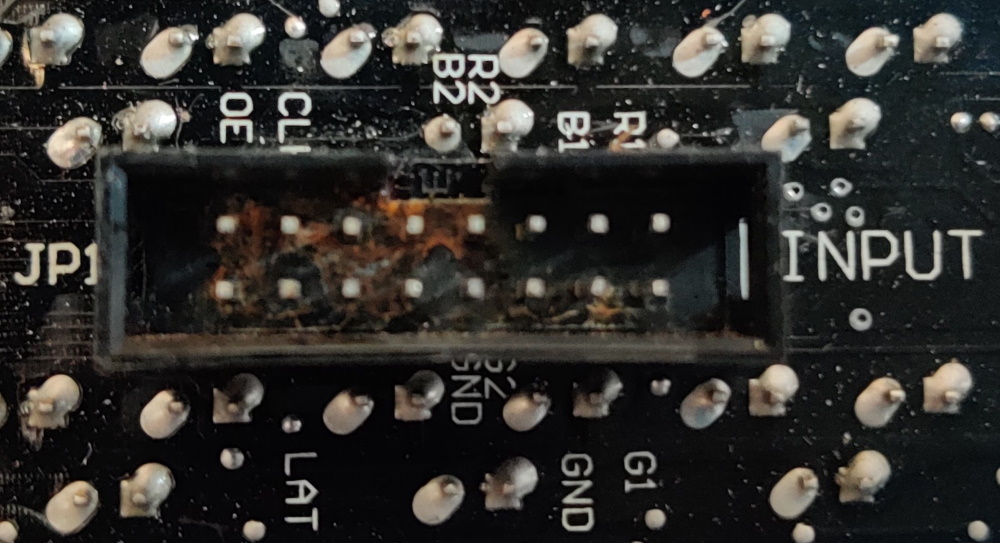 Thanks to the labels (Whoever designed this PCB, seriously, thanks) this gives us some idea of how these modules might be controlled. ‘GND’ are grounds, ‘OE’ is almost certainly ‘output enable’, ‘CLK’ is a clock which implies a serial control scheme of some kind, ‘LAT’ is probably short for ‘latch’, and R1/R2/G1/G2/B1/B2 are likely the colour inputs.

I paused at this point for dinner, and flicked a message to a former colleague that used to work at a tech company involved in digital road signs (among other things), asking him if there was a standard control scheme for LED modules such as these. He said that usually they were designed upon standard shift registers - direct quote “The modules are usually dumb, intelligence is in the controllers”.

So, once I got back, I took a closer look at the ICs that were stamped around the board - I found only two kinds.

I recreate the block diagram for the MBI2054 here: 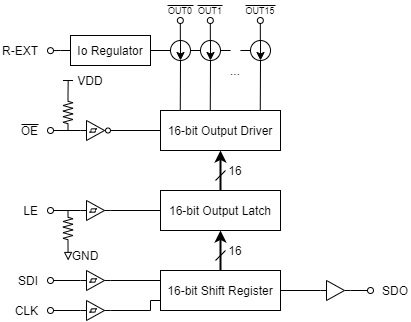 We can also get the following helpful information out of the data sheet:

As a refresher or in case you’re unfamiliar, shift registers operate according to the following generic internal block diagram:

Each of the boxes in this diagram is a D type Flip Flop. On a rising clock edge, they capture the data at D, to be then emitted at Q. As such, after the first clock tick, the first flip flop will be emitting the first bit of data from the serial input. You then change the serial input to the next bit of data, and pulse the clock again. Now, the first flip flop is outputting the second bit of data, and the second flip flop is outputting the first. On and on this goes until you completely fill your shift register, and your input data stream is now present on the outputs of the shift register in parallel.

From the datasheet then, we can conclude that inputs LAT, CLK, and OE are going to all shift registers in parallel. Presumably then the R1/R2/G1/G2/B1/B2 are the data inputs to the shift registers. Why, though, are there two wires for each?

Investigations with a microcontroller

It’s worth pointing out here that due to the coronavirus outbreak, at the time of performing this work, I was stuck at home without my usual work-provided equipment and components. At any rate, I figured that I could probably get away with what I had on hand. Firstly, I needed to make sure I could safely power up the LED module. I found a 12V 2A power supply, and applied it. Then, I pulled the OE pin low, and brushed noise against the LAT, CLK, and data pins. Every LED abruptly turned on - I had invited the sun into my office. These boards are hecking bright! Fortunately, nothing exploded or melted. A good start! Using a multimeter, I could see that my 12V power supply output had dropped to 11.5V, so I turned everything off.

My first experiment was to find out (a) how the loaded data made its way to pixels on the screen, (b) the purpose of the two pins for each colour, and (c) how much current this board was actually trying to draw. Unfortunately for me, my multimeter ammeter had a blown fuse, and I couldn’t go get another fuse from anywhere.

Fortunately, I had an Atmel Xplained Mini board (Atmega328PB based) at home to work with, so I used this as my controller. I quickly wrote a small program to bit bash out data to the shift register’s G1 pin (chosen at random). I was interested to see what would happen if I pumped different data into the system.

I had it wired as follows:

And here’s a clearer representation of that INPUT port from earlier:

In the main(), I simply called Disp_Send(0xFF, PIN_G1) with a short delay over and over again in a loop. To prevent cooking my power supply and further searing of my eyeballs, I also configured the OE pin as a PWM, keeping the display on only 6.25% of the time (16 cycles of every 256).

I grabbed one of the other LED modules now, one which was missing several LEDs on the PCB, so that if something went wrong I wouldn’t break one of the modules that appeared to be in better condition. I was able to see data coming onto the screen! I modified the code slightly to use both pins 1/2 of each color, and then produced the following output:

During all of this I had let a good friend know about the rubbish bin full of LED modules. He took a spin out in his car to get some for himself, and sent me some maths about the LEDs:

A good point, and one I should have considered earlier. He then measured it using a better power supply than I have at home, and measured 3.7 A given 13V input (~48W). The maths was an overestimate then, but it confirmed that I still needed to be careful in my code - keeping the display at 6% PWM seemed sensible.

Although, we then got curious, so I wound it back to full brightness, and hooked up an old oscilloscope across the power pins of my PSU:

It looked like my power supply was not, in fact, coping - those spikes were around 4V in size!

My friend then sent me this image, after he’d got invested in disassembling one of his LED modules: 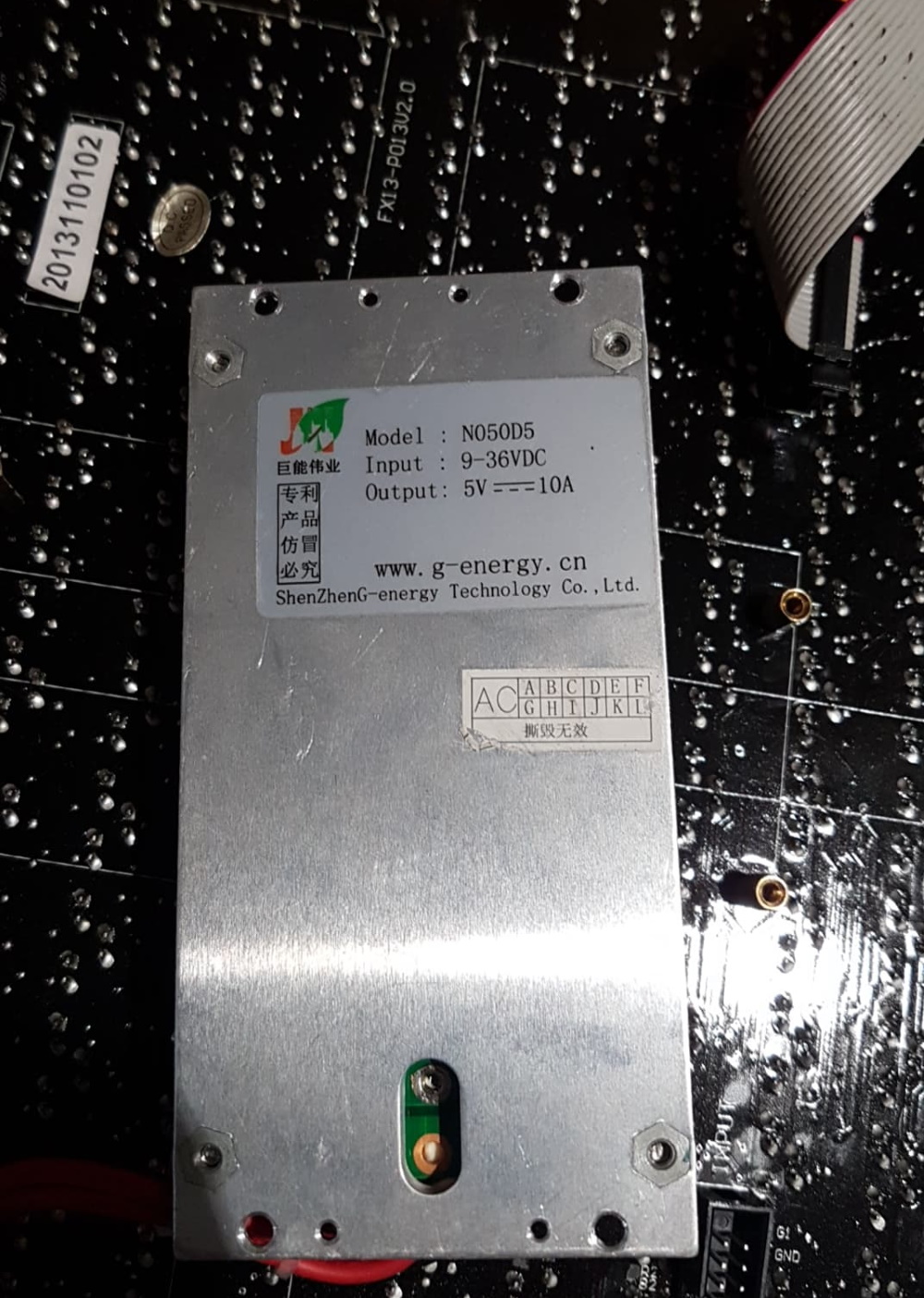 Turns out these modules can take up to 36V! I immediately switched over to a different PSU I had at home, one that was 24V 2A, which should just cope with the ~48W he measured earlier. I found with my oscilloscope that at full brightness (which was now even brighter than before), the 24V 2A PSU gave an average of 24.3V, with a 1Vpp oscillation at about 50kHz. Hence, it was still being overloaded, but not by as much.

At any rate, once I re-applied the PWM, the noise completely vanished, and the PSU was rock solid at 24V. I then took this opportunity to test all of the modules I grabbed (I had taken 8) - six of them worked perfectly with no dead pixels, two of them had a few dead and missing LEDs.

Satisfied we’d solved the power requirements, I now moved on to writing a basic algorithm to drive the display. From the experimenting earlier, I knew that the shift registers were arranged such that each eight bits of data was arranged in two four-bit rows. This cascaded down for four times in total, before the shift registers moved to the next segment. You can see this in the video from earlier in this write-up. I depict it here in this image: 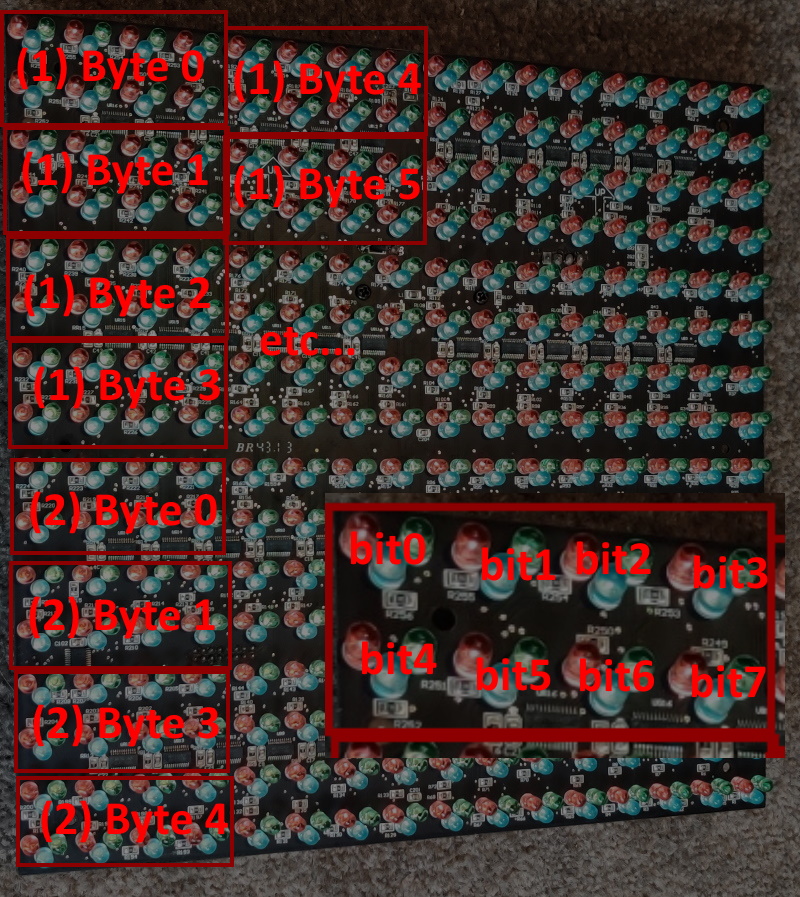 So, all pixels are individually addressable, but getting them out is a little fiddly. Imagine you have a canvas of 16 pixels by 16 pixels. You address it as such:

To shift in this canvas to display it, you need to do the following:

I now put together some code to do this. Firstly, we define a color type, and two arrays to use as screen buffers:

Why do we need two buffers? This is because displaying an array and drawing to an array should be mutually exclusive activities. Consider a screen that updates at 60Hz. No matter what, it needs to be able to send a picture out every ~16.6ms. But what if you haven’t finished setting up this frame’s picture yet? Drawing your pretty picture to a display is only practical if you aren’t currently halfway through updating it!

As such, we define a “front buffer” as the one that is currently being rendered by the system, and a “back buffer” as one that we’re currently manipulating, adding text and drawing shapes and so on. When we’re ready to swap them out, we change the pointers by calling Display_SwapBuffers.

Now, let us examine Display_TransmitBuffer(), which we shall call from within a timer interrupt (I used Timer0, set to 16ms, giving 62.5Hz update cycle for the display).

We then add a function to add pixels and lines, and can generate the following output:

From here, it also isn’t hard to add support for further features, e.g. text, circles, etc. I also modified the code so that it can support daisy-chained modules in the horizontal direction!

If you’re interested, the code that I wrote to do all of this is on the project Github under display.c

Can I try or use this myself?

In terms of the code, sure! Everything I’ve written is released on the Github project under the MIT license. In terms of the hardware, well, I couldn’t find the modules online anywhere, but presumably other modules with similar I/O requirements exist?

At any rate, thanks for reading - hopefully you found it interesting!

I posted this to Reddit if you’d like to comment! Already, user /u/dakesew identified the protocol as a subset of Hub75, which is a protocol designed for control of large RGB LED panels (often 32x32 or 16x32). The complete protocol mentions usage of the four grouped pins I marked as NC in the middle connector, calling them A/B/C/D, and mentioned that they are used for row addressing. On my panels they do not seem to be connected, however. Perhaps this is because my panels have fewer pixels (16x16), and/or the protocol was adopted incorrectly for this design.