Embedded projects often call for some kind of data storage and retrieval. For instance, you might have need for a data logger to record data points over long periods of time. You might have user settings that need to be preserved after the device is shut off and rebooted. You might want to profile your application, or debug certain features.

There are a number of ways to do this, and one of my favourites is to add an SD (or other memory) card to a project. It’s not too complicated, and it adds a lot of flexibility, as you can easily take the SD card out of the project and examine it with another machine. My second favourite method is to slap on a 20 cent EEPROM, but while that’s cheaper it’s a lot less flexible and usually stores a lot less data! 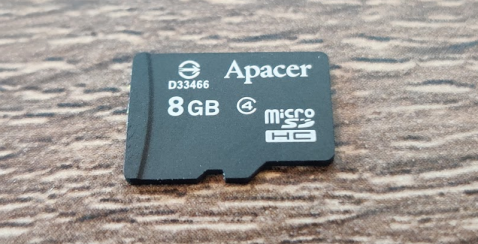 I’ve been asked more than once if I have any good tutorial resources for adding SD cards to an embedded project. Well, there are a few good tutorials and resources floating around online (including even my own resource from 2017) but some of them are a bit dated, relying on older tools and libraries. Further, while there are some amazing resources (e.g. ChaN’s) on talking to SD cards over SPI, there are less that describe how to interface this with file systems such as FAT, and less again that describe how to do it while also working with STM32’s build environments. Complicating matters is that officially you should use the STM32 SDIO peripheral to interface with an SD card - however, not all STM32s have the SDIO peripheral, leaving us to fall back on the SPI method (That said, it is worth noting that not all SD cards support the SPI interface).

Well, in this tutorial I’m going to walk through the steps that one would use to get an SD card working over the SPI interface on a STM32 dev board (re-)using my FatFS driver from 2017. FatFS is an amazing open source project also provided by ChaN which has since been integrated into the STM32Cube tools. If you’re interfacing with an SD card using the SDIO peripheral, it’s pretty easy and the tooling does most of it for you. If you’re working with other kinds of configurations, e.g. SD card over SPI, it’s actually still pretty easy - you just need the appropriate driver! So, today I want to show how you can use the FatFS libraries within the STM32CubeIDE development environment, and show how you can simply drop in the appropriate SPI driver to make everything work.

I’ll be assuming that you already know the basics of creating a project and setting up debugging and so on. If not, then please check out this earlier tutorial, in which I walk through getting started with STM32CubeIDE.

Equipment for this tutorial

Today I will be using the following:

Note: The above Amazon links are affiliate links. As always I encourage you to shop around, but Amazon usually has pretty good pricing.

In this blog post I’m not terribly interested in the low-level behaviour we’re using to get an SD card working beyond “we talk to it over SPI”. It’s worth knowing though, so go check out what ChaN wrote, and then come back. The key knowledge that I want to show in this tutorial is around the architecture of an embedded application that wants to use an SD card with a FAT file system (using the FatFS library).

In general it’s always useful to visualise the architecture of what you are working with. In a FatFS system it looks like this: 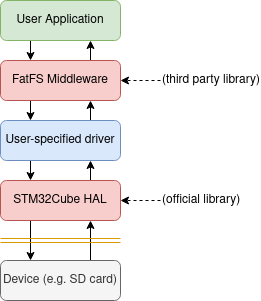 FatFS is provided as a Middleware which can translate FAT file structures in memory into their actual files. Handy! For it to do its magic, it needs access to a storage medium. It relies on several functions as ChaN notes here:

It’s these functions that we’ll need to provide. For an SD card they’re pretty involved, but don’t worry, we’ll just be dropping in a pre-existing driver and linking it up.

Setting up the Project and Pins

The Device Configuration View is where you configure exactly which pins/peripherals are enabled and what their settings are. Since we want to be connecting to an SD card, we need to enable an SPI port and then decide where to wire it.

Let’s quickly work out where our pins are going. Our goal here is to identify an SPI peripheral with easy-to-access pins as well as a GPIO pin to use as a chip select.

On the Nucleo-F303-RE we have both Arduino style headers as well as ST’s branded morpho headers, which are the double rows of pins down each side. While it’s tempting to use the Arduino header’s SPI port (since it’s labelled on the silk screen) I actually don’t like to, as the on-board LED shares one of the pins (one of the worst features of this particular development kit). So, instead I will take a look at the morpho header pinouts.

This document from ST provides us with the correct pinout for the F303-RE, or alternatively (and in a more attractive and detailed way) the same info is presented on ST’s mbed OS website here.

Straight away I can see that SPI2 is the winner - it is broken out onto the pins in the bottom right, along with PB1 which we will use for the chip select line. 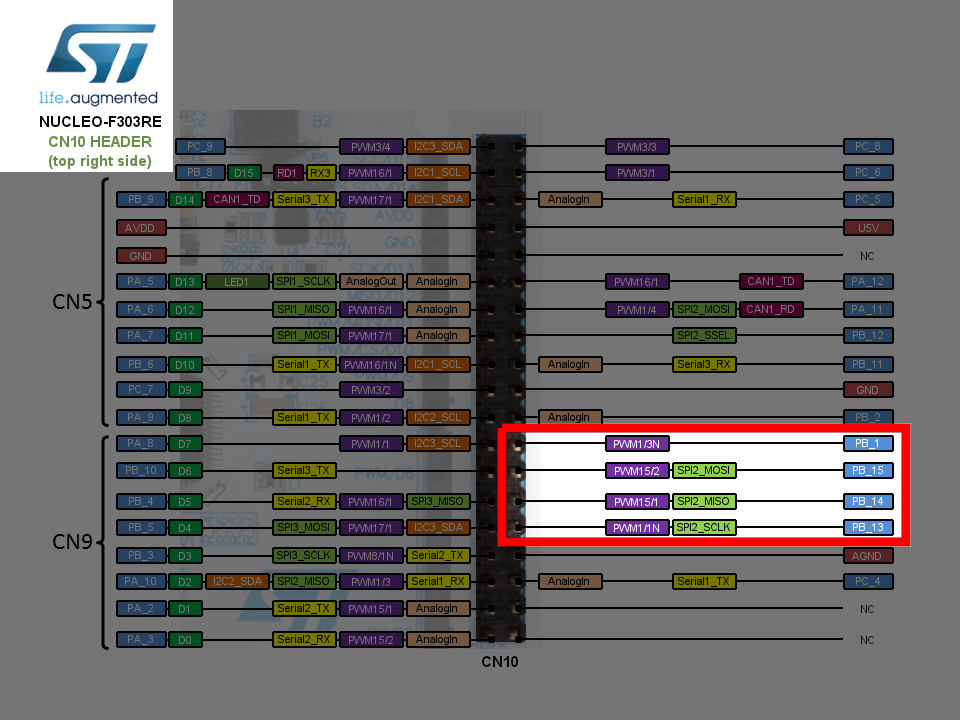 So, let’s set up our SPI2 and GPIO in the Device Configuration View. Click SPI2 on the left, and then set it to Full Duplex Master with no Hardware NSS. Then set the Data Size to 8 bits, and the clock prescaler to 128 (SD cards start up with low speeds and switch to higher speeds later. We’ll look at how to do this soon). 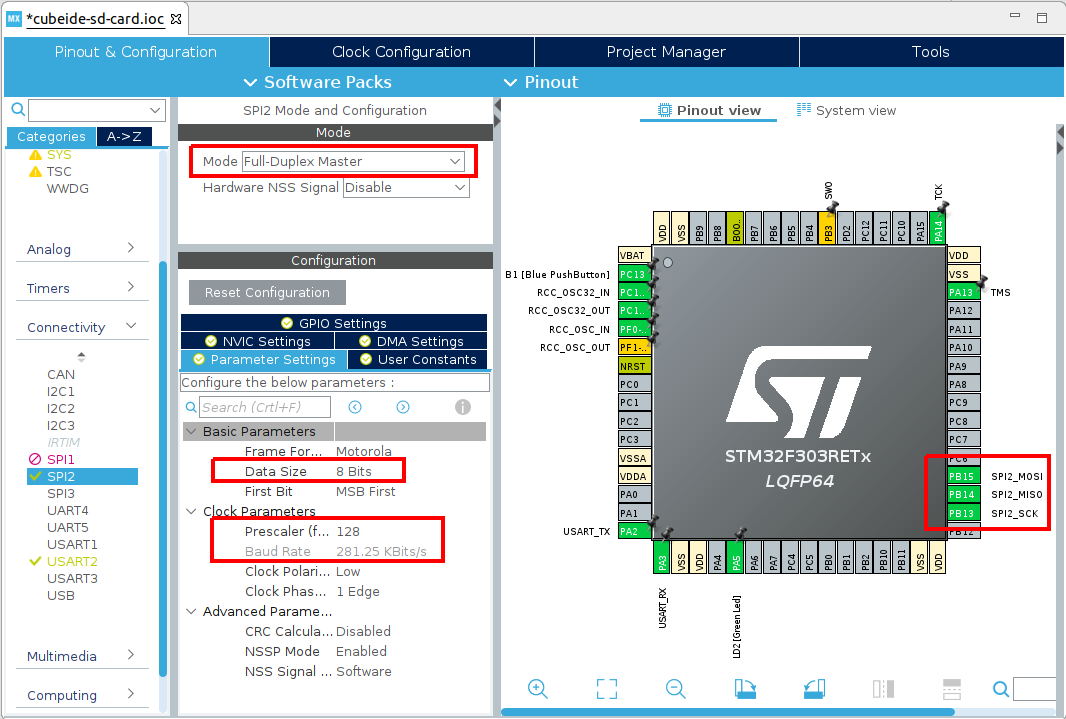 Then, create your Chip Select line on PB1 - I find setting a sensible name is also good: 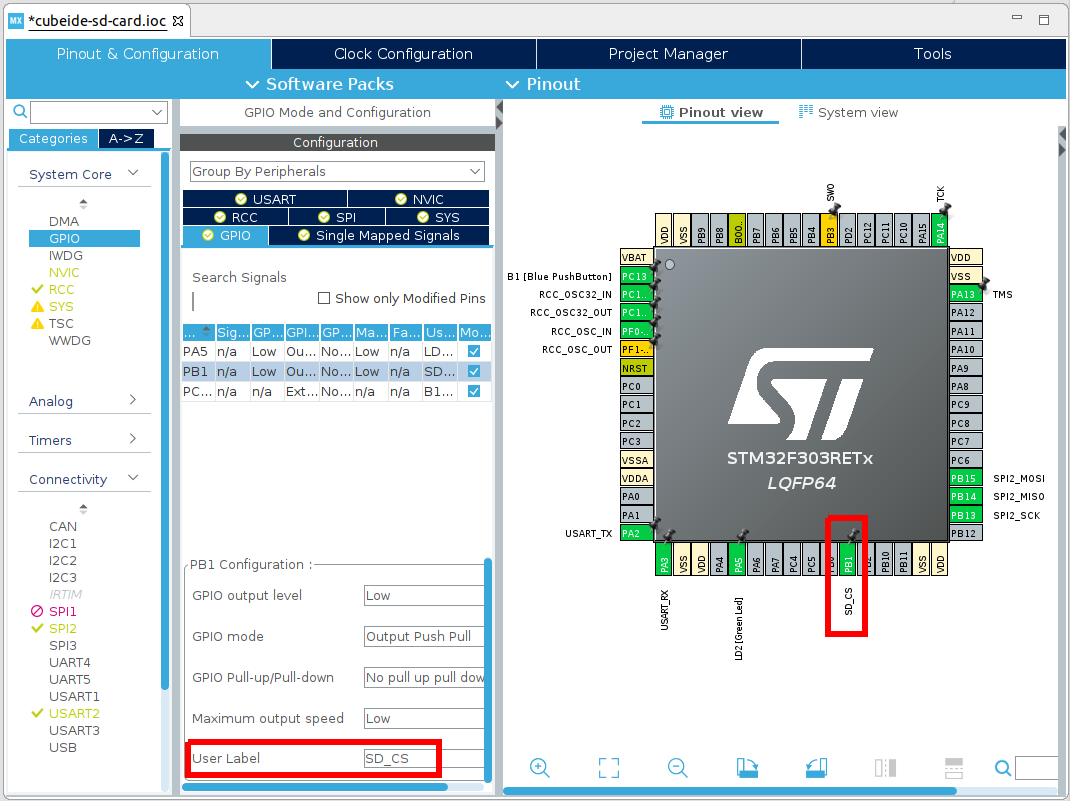 Finally, as we’re going to be using the SD card with the FAT file system, scroll down in the device categories to Middleware, and expand this, then enable FATFS as User-defined. You may leave all other parameters as their defaults. 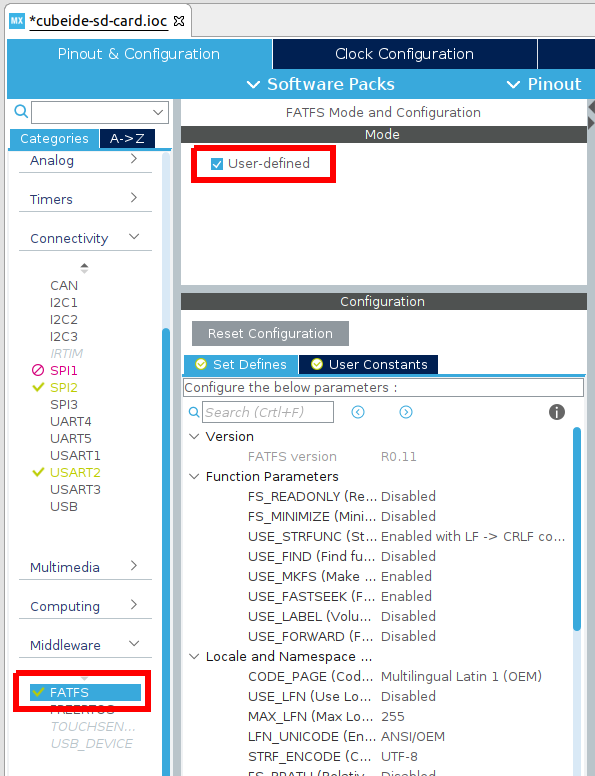 Now that you have configured the pins in CubeIDE, we need to physically wire them in real life!

Using the SPI pins from the earlier figure, and the power pins depicted here, 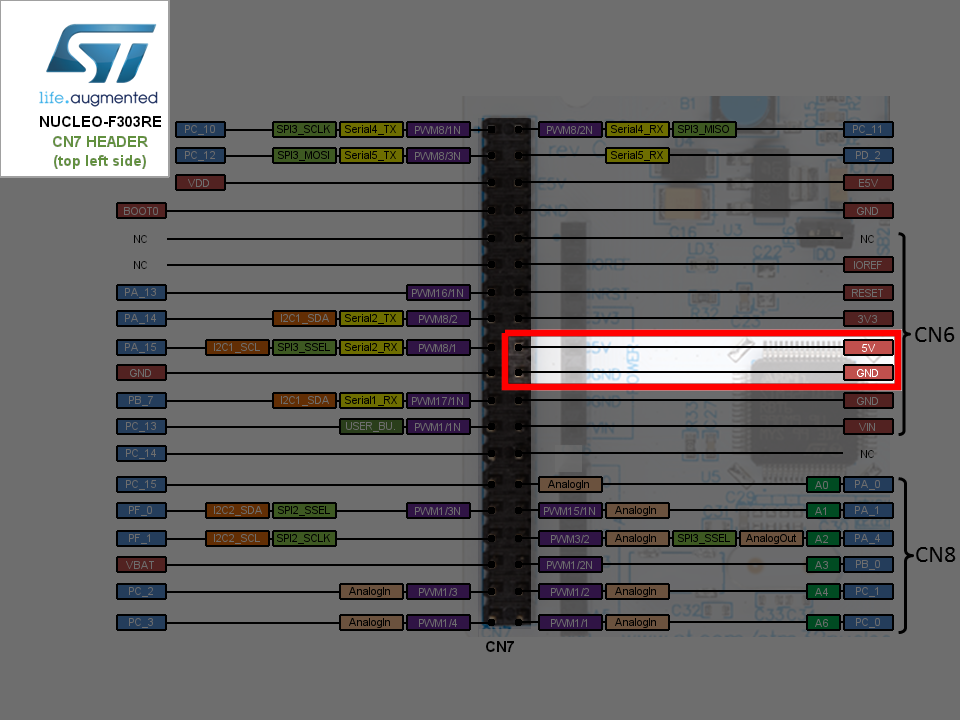 Use your ribbon cables and connect these to the appropriate pins on the SD card adapter module (the module’s pins are labelled on the silk screen, so this isn’t much of a chore). 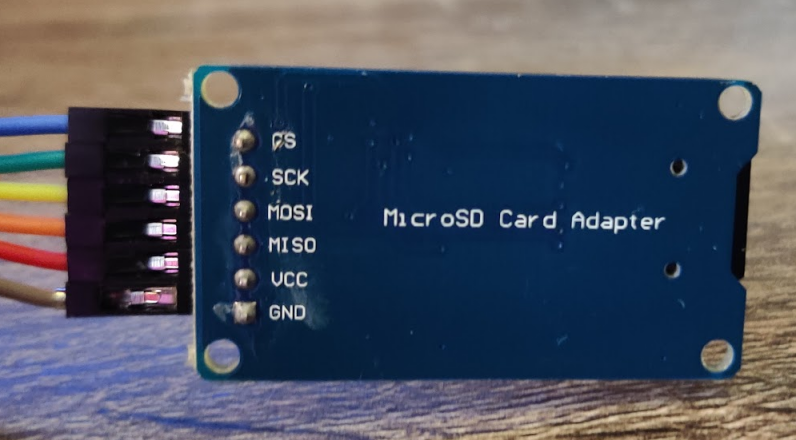 In table form, the connections are as follows:

Once you’re finished it should look something like this: 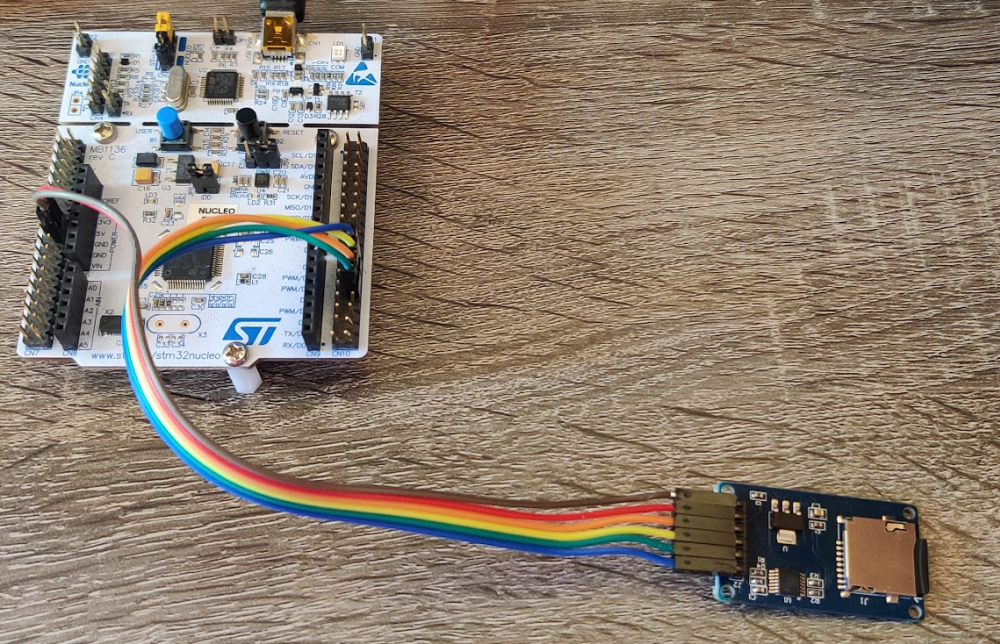 Key files to make this work

Download these and copy them into your FATFS/Target directory (you can also copy them into Core/Src and Core/Inc respectively if you’d prefer, but I think that’s messier).

When you’ve done this, your file viewer should now look something like this: 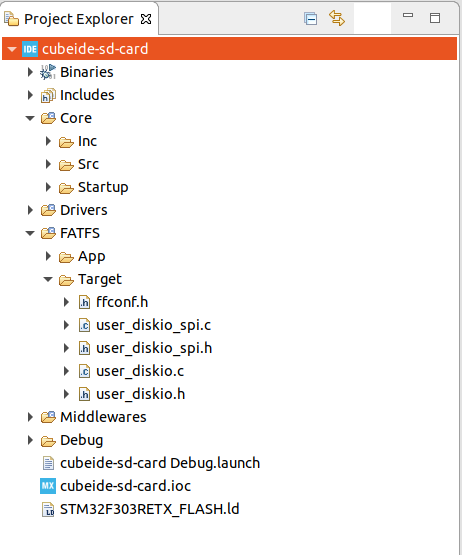 Now we need to link the driver into FatFS. This will involve just a simple change to the user_diskio.c file. There are more elegant ways to do this, but if we’re not careful we will fall afoul of the STM32CubeIDE code generator, so we are limited to changing code in the commented areas.

What we’re going to do is embed calls to the SPI driver functions in each of the autogenerated driver stubs. I’ve annotated the changes below with //ADD THIS LINE. You’ll see that each of the function calls just calls the appropriate function in our driver.

Finally, for our driver to work, we need to make just one more change - we need to tell it which SPI we are using! You’ll notice at the top of user_diskio_spi.c the following snippet:

So this is what we need to do now. Pop over into main.h. You’ll see thanks to our Device configuration from earlier that SD_CS_GPIO_Port and SD_CS_Pin are already set for us, so we only need to add the following line:

Finally, we need to consider the clock speeds for our SD card driver. If you’re using the Nucleo-F303RE, great, the defaults are what I was using. If not, open up user_diskio_spi.c and just make sure these prescalar values work for you to generate approximately the listed speeds:

First, ensure your micro SD card is formatted to the FAT file system (in your operating system of choice just insert the SD card and then format it to FAT32/FAT/msdos - not exFAT).

Then, create a file test.txt in the root of your SD card. Puyt something in it, e.g. Hello I'm on an SD card. Save the file and remove the SD card from your computer.

Now plug the SD card into the module, and connect the development kit to your PC. We’re going to make output will be coming via the integrated COM port, so make sure you open that up using either e.g. minicom (Ubuntu) or PuTTY (Windows).

Now let’s add some code to main.c. We’re going to want a printf that outputs to the integrated terminal, so we need to add a few things:

Great, that will let us call myprintf() as if it was any other printf with strings of up to 256 characters and the output will come out on UART2 (the virtual COM port).

in main.c From User Code 2 to User Code 3 (inside the main() function):

Compile and download the project to your microcontroller. In your terminal, you should see the following appear!

If any numerical errors are given you can convert them into their meaning from the look up table in Middlewares\Third_Party\FatFS\src\ff.h. You should double check your wiring as well. Sadly, not all SD cards will work over SPI - I wasted a good few hours with a Kingston SD card before changing to an Apacer one that just worked instantly. Good luck!

Also note that if you’re using this process with your own custom circuit, you may need pull-up resistors on the SCK, MISO, and MOSI lines. The SD card module I used in this post includes them internally - if you’re wiring your own design, you might find you need to add them. You can also consider enabling the internal pull up resistors. More details are included here.

If you would like the complete code that accompanies this blog post, it is made available in the associated Github repository here.